In power transmission, belts are flexible loops of material that can link two rotating shafts mechanically and transmit power between them. Belts are also the primary component in belt drives, where one or more continuous belts are fitted over two pulleys at two shafts and rotary motion is transferred from the driving pulley to the driven pulley. 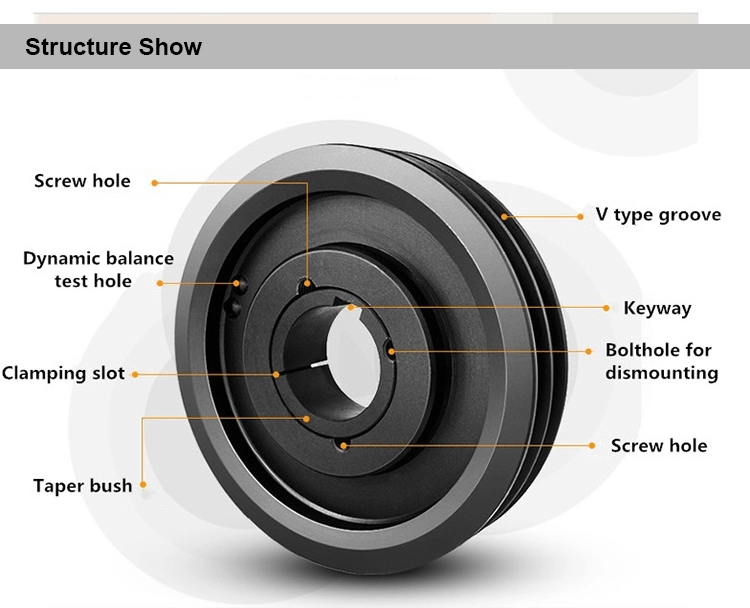 As compared to chain drives and gear drives, belt drives run quietly and smoothly and do not need lubrication. Maintenance is also comparatively convenient, and the driven shaft speed can be easily altered by changing pulley sizes.
The most common types of belts are V-belts and timing belts. V-belts are the most common type of belt today, and as their name suggests, their cross-sectional shape comes in the form of a “V”. Generally endless, the “V” cross-sections of these belts lodge in the mating grooves of their corresponding V-belt pulleys, preventing slipping due to under-tensioning. In general, V-belts require less width and tension compared to flat belts.

Timing belts are toothed belts that enable positive drive. They have rows of interlocking teeth that fit securely with a toothed pulley to avoid slipping. Timing belts require less tension than other belts, have no slippage, and do not require lubrication, however their power capacity is lower than V-belts and chains. They are frequently used in camshafts of automobiles and crankshafts. 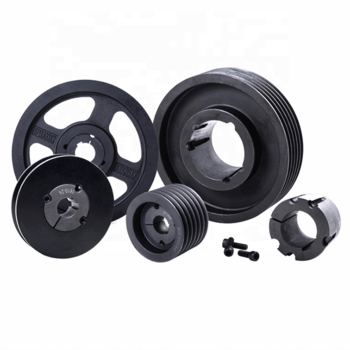 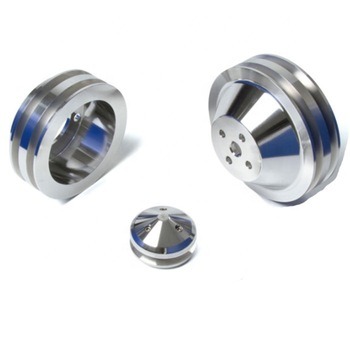 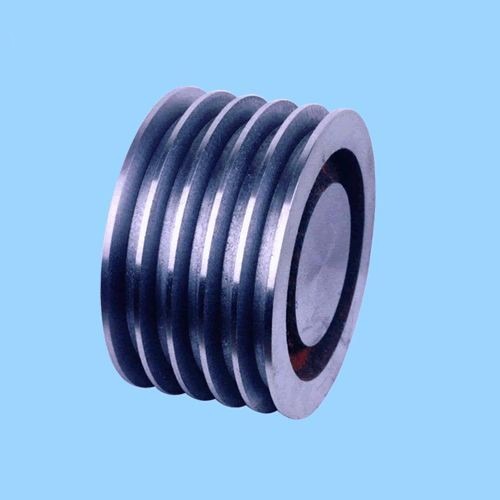 V-belt pulleys with solid hub, Belt pulley, pulley
Manufacturer of Sheave Pulley, V-belt pulley, Timing belt pulley
A sheave or pulley is a wheel on an axle or shaft that is designed to support movement and change of direction of a taut cable or belt, or transfer of power between the shaft and cable or belt. In the case of a pulley supported by a frame or shell that does not transfer power to a shaft, but is used to guide the cable or exert a force, the supporting shell is called a block, and the
pulley may be called a sheave.
A sheave or pulley may have a groove or grooves between flanges around its circumference to locate the cable or belt. The drive element of a pulley system can be a rope, cable, belt, or chain.
Hero of Alexandria identified the pulley as one of six simple machines used to lift weights. Pulleys are assembled to form a block and tackle in order to provide mechanical advantage to apply large forces. Pulleys are also assembled as part of belt and chain drives in order to transmit power from one rotating shaft to another.